The amazing Steve Schenkenberger is in need of our help! Steve was riding his mountain bike on Super Bowl Sunday around 8pm on Niguel & Ridgeway Avenue when he was struck by a hit-and-run driver. Thankfully, someone saw what happened and he made it to the ER. Steve has sustained injuries throughout the left side of his body, but the most severe are in his brain. He had emergency surgery the same night where they removed a piece of skull where he had a blood clot, which relieved pressure. He continues to have brain swelling and the medical bills are starting to pile up, quickly. Most importantly, PRAY…secondly, if you can help support financially it would be greatly appreciated. Steve is a Father of 5 young boys, ages 9 years-4 months old, and married to his incredible wife Lori. He is the sole provider for the family. They are an amazing, selfless, loving, wonderful family and they need our help NOW!

Fundraiser at OC Tavern San Clemente for the Schenkenbergers

The business owners of OC tavern have opened up their restaurant for the Schenkenberger family.

The dining room will also have the Deontay Wilder and Tyson Fury boxing rematch on the TVs at 6pm.

Holiday shopping plus 20% of proceeds benefit the Schenkenberger Family! You do not need to be a member of Marbella Country Club to attend. You can drop in and shop or purchase a seat for $35 to have lunch too! Purchase tickets here: https://www.eventbrite.com/e/2019-marbella-country-club-annual-holiday-boutique-benefiting-rad-dad-ticket-for-lunch-buffet-tickets-77648724425

A beautifully written and illustrated 6X6 hardcover book available for children and adults alike, reminding us of our daily choices in life. Written by Steve Schkenberger, before his injury, was illustrated after the accident.

If you have any questions, please email RadDadTBI@gmail.com

Orange County Sheriff’s Department investigators have located the vehicle and identified an adult male as a person of interest involved with a hit-and-run collision Sunday evening near Niguel Road and Ridgeway Avenue.

No arrests have been made in the ongoing investigation.

The sheriff’s department would not confirm the victim’s name, only that he was a male adult in his mid-30s. However multiple online support pages identified him as Steve Schenkenberger of San Juan Capistrano.

Schenkenberger remains in a coma after being struck by a car while riding his bike. He sustained injuries to his brain and the left side of his body after he was hit, according to a Plumfund page created in his name. He is being treated at Mission Hospital.

The medical fund for Schenkenberger, a husband and father of five boys, had raised almost $64,000 as of Thursday afternoon.

Witnesses to the traffic collision are urged to call Orange County Crime Stoppers at (855) TIP-OCCS.

Last night after the Super Bowl…

Last night after the Super Bowl, Rich and I took off in our car to go pick up our daughter Aislynn (12) from a friend’s house. It was almost 9:00pm, the streets were damp from rain, and hardly anyone was on the road. It was about a 15 minute ride to the friend’s house.

We picked her up and were on our way home when we saw three people standing in the mostly deserted street. Rich slowed down, and as we got closer we saw that there was a body lying in the street and a smashed bicycle about 20 feet away. We stopped our car and Rich got out  while I stayed inside with Aislynn, Aria and Aiden. I could hear Rich explain to the three people that he was a paramedic,  and someone said, “This just happened! A hit and run!”

I called 911 and gave them our location while Rich checked the man for injuries. Then I got out of the car, handed the phone to Rich so he could give medical details to the 911 dispatcher, and walked over to the man. I wasn’t sure how I could help, but it felt wrong to just stay in the car when someone was lying in the street, hurt. But when I saw the man up close I realized that he wasn’t just hurt; he was dying. There was blood coming out of his mouth, out of his nose, and out of his ears. He appeared to be unconscious and he was breathing in labored, raspy breaths.

Rich said not to move him because his spine could be injured. I felt so helpless. I remembered that we had blankets in our car and thought well, at least let’s make sure he’s warm until the ambulance can get here. Rich put a blanket over him. I wanted to to do more for him but there wasn’t much else we could do.  I kept thinking, this is someone’s son. His mother has no idea that he is lying in the street right now and that her life has  been forever changed, either by his death or by helping him live with a traumatic brain injury. What if this were my son and I couldn’t be with him? What would I want for him?

So I knelt down near his head and I spoke to him. I told him that we are getting help for him, that the ambulance would be here any second, that he’s going to be okay, that he’s not alone. With every raspy breath, blood would spray from his nose. And as much as that was hard to watch, I was so worried that his raspy breaths would stop. I just kept saying to him “you’re going to be okay, you’re not alone, we are here with you…”  I wish I had known his name so that I could have said his name, too. People like to hear their names.

While I was talking to him, another man was gently holding the victim’s head in between his hands, and he, too, was speaking to him. I could hear him say, “Hang on, man…help is on the way.”  I felt thankful for this man, for his gentle touch. That’s what I would want if it were my son. I would want for my son to be calmed by a human touch.

The police arrived, and then the fire department got there within minutes and took over his care. I backed away and watched from a distance while Rich briefed them on his condition, and I closed my eyes and silently prayed for this poor man. That’s what I’d want if it were my son. I would want someone to be praying for him. Soon we got back into our car and drove away. I was shocked at how easily we just got into our car and left. It felt wrong, to leave like that. But Rich said there was nothing more we could do.

We drove home mostly in silence, except for me.  I kept saying things like, “That was awful” and “I feel so bad for that poor man”  and Rich would just chime in with  “Yep. It sucks”  every now and then. I couldn’t get the man’s face out of my mind. I kept seeing all the blood coming from his head and pooling in a small puddle next to him. I kept hearing the raspy sounds of his breathing.  Yet my husband was saying, “Yep, it sucks” as if we were discussing a bad movie.

We visit him at the station and it’s all fun and games and woo-hoo! our daddy is a fire fighter! The novelty of his job never wears off. As they say, everyone loves a fireman. 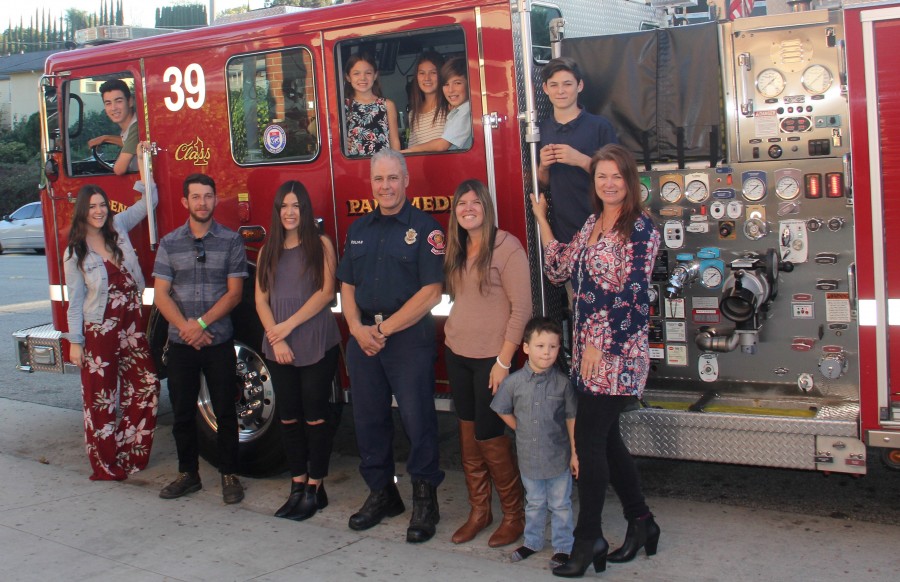 I think we are so removed from that part of his job that it’s hard to imagine the reality of what he deals with every day at work. It really is a lot of blood and broken bodies, a lot of sickness. Death.

I look at him now and think, how does he do it day after day? Because seeing it just once has had an effect on me. I assume you just get used to it. Rich explains that you don’t really “get used to it” but it’s more like you learn to let it go and move on. Because there’s always another call to go on, always another trauma victim. You do your job right then and there, and then you pass the person on to the doctors at the hospital; not your patient anymore. You move on.

I’m grateful that there are those who can do the job that medics do because it sure isn’t for everyone. It’s definitely not for me because I am having a hard time “moving on” from what I saw last night. I can’t shake it because I know that he is someone’s son, someone’s brother, possibly someone’s husband. He might even be someone’s father. He is everything to someone out there.  And my heart hurts for them all.

Please enter the Page ID of the Facebook feed you'd like to display. You can do this in either the Custom Facebook Feed plugin settings or in the shortcode itself. For example, [custom-facebook-feed id=YOUR_PAGE_ID_HERE].